Building Learning Power – welcome back to Claires Court – where the grass is always greener.

Posted on September 10, 2015 by jameswilding

It has been a funny old holiday, drier than other summers I can remember, yet colder than most in recent years. Perhaps the Principals are to blame; in commissioning Agripower to seed some 15 acres of our new fields adjacent to CCJB, we took a calculated risk that a June sowing might get caught in drought and need overseeding later in the year. So dry had been May, that we had been able to sift almost all the stones and lay them under an almost perfect tilth of 20 cm or so. The seeds were drilled, and lo, as if Noah had called for the rain, it fell from the sky. Not it must be said as a deluge, which would have washed all our good work away, but just enough every few days to support the growth of a wonderful sward of the finest playing field.

We have just treated it with a mix of weed and autumn nutrient, to keep the grass growing, and to kill the pea and dandelion that seemed to enjoy the conditions just as much. The photo shows the 2 cricket squares (just) sat gently in a wonderful rolling landscape.

The wonderful thing about summer is that we also reap other rewards from our work. Here’s Matthew Becksmith, one of our new graduates just down from Durham University with a 1st class honours degree BSc (Geography) writing about his year to come:

“After an internship with PwC  in their Pensions Audit department in the Reading office last summer I received a job offer from them, which I have deferred to a September 2016 start. So in the meantime I’m having a post-uni gap year, currently working at the Belgian Arms in Holyport to earn some money before heading to Canada in November to be a ski instructor in Whistler for the winter. If I’ve got any money left I hope to travel in Central America next summer before cracking on with the ACA accountancy qualification next Autumn.”

Matthew’s brother Adam was one of the Year 13 students completing their A levels this summer. Adam gained straight A grades and is off to study at Bristol University, and really was quite an extraordinary pleasure to meet his parents on results day. His parents were extraordinarily proud that both boys have become such outstanding adults, and not just because they have got the grades, but because they have done so in such style. 2 brothers, both unexpected leaders of their generation, completely different in the way they get on with life, yet set for exciting futures both. 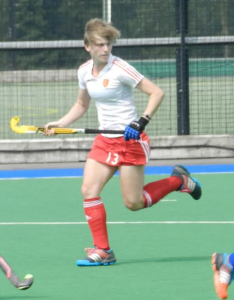 You’ll hear more next week as we run up to Speech Day, of our Head girl and boy, Ellie Rayer (England U23 Hockey international, now studying at Loughborough (yes back already for Hockey training) studying Sports Science, and George Monk (3xA*) off to read Chemistry at Oxford and of so many more outstanding characters off in the main to higher education, though some to work as well, for which they are well suited. We enjoyed our best ever series of A level results this Summer, with 53+% gaining A*, A and B. I know I bang on about being a broad ability school and all the benefits that brings, and here’s the proof once more that we would not have been a better school if we had deselected the bottom half to give us 100% A*, A and B.

Only one 8’s crew a year can boast being British Rowing’s National Champions, and here’s Chris Clarke and the Claires Court crew that won the blue ribbon event at Strathclyde at t 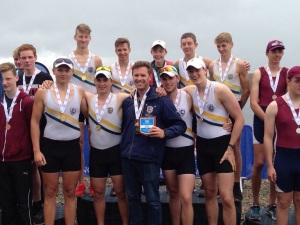 he end of July. Walking around school today, meeting the boys for the first time since their regatta win, it was rather touching to find they still had their medals in their pocket. Pinching themselves they were, even 6 weeks since their victory. With three of the boat club winning international selection for England or GB, it’s no surprise the crew still seemed to be walking on water. 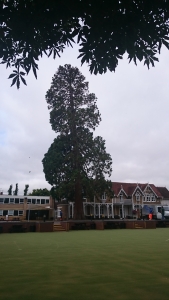 If all seems green, one wonderful old girl of the school bit the dust this Summer. Our Wellingtonia, planted we think in 1853, started showing severe signs of distress 2 years ago, and this summer started dying back quite badly. The old dam

e started leaning even more dramatically towards the school, so sadly, we had to scale her for the first time and gently, carefully lower down to the ground. Here’s that process half way through, and you can see the obvious difference in vigour on the sides of the tree. The good news is that I have saved the odd branch and plan to make multiple table mats from the wood – not much good for anything bigger, being a wide grain wood prone to warp and bend, but a happy memory for those of us that spent our childhood years under its cover.

Round about results time this August, the Claires Court Shed Theatre made its debut in the West End, with 10 performances of ‘From Morn ’til Night’, the story of Vincent Van Gogh’s life as told through his letters. It’s a play developed by Maggie Olivier, Head of Drama, from original ideas developed last year and now worked up into a really commercial offer.

Her colleague Rob Bowen played the adult Van Gough, Elliot Stokes his younger self, Dom Crayden as Paul Gauguin, and brilliant support given by Danny Cornell, Will Ansell and Vickie Morrish. For me though the 2 actors who almost matched Mr Bowen’s brilliance and shared the best supporting rolls were Charlie Tuck and Hannah Wardman – indeed it’s difficult to believe that there were not real stars in the making at the Leicester Square Lounge Theatre. The set design by Lucy Wardman and Lighting and sound by Callum Plain were grand enough to stir the imagination, but so subtly changing that they disappeared as we lost ourselves in the intenseness of the theatre, as Van Gough slipped in a madness beyond repair.

And finally, we have returned to school, adults and children, refreshed in the main from a rest from our endeavours. Our Academic Faculty of teachers, instructors and allied learning professionals number some 150, and we filled Norden Farm on Tuesday morning for our back-to-work get-go. The best hour and more was given over to Professor Guy Claxton of Kings College and Winchester Universities, taking the lid off how learning really happens, and assisting us in tweaking the Claires Court Learning Essentials to build even better learning power. (BLP). Honestly, there is no better inspiration than someone such as Professor Claxton to validate our work and yet show us our next steps along the way to ensure our pupils graze on our elysian fields even more successfully. Professor Claxton will be back with us to support the embedding of such ideas even more fully into our work. “You do need to find ways of helping children struggle; not by ignoring them, but by insisting they use the various tools at their disposal before putting up their hands and being helpless.” Here’s on of his ideas to set you thinking…