A line of Best Fit – Children, Education and Health

Posted on February 5, 2016 by jameswilding

Just dropped onto my desk is some useful guidance from  the Boarding Schools Association, with regards to the Zika virus, new arrival on the scene as a major health concern across the world. Almost all the major health developments we have seen over the last 200 years have resulted initially from major infrastructure projects that bring drainage, sewage treatment, potable water, appropriate food supplies for all and such like. Alongside the infrastructure build has come vaccinations, for smallpox, polio, measles, mumps, whooping cough and a litany of others that help protect us just enough to give us both immunity and a healthy immune system.

The effects of Zika are almost Orwellian in their darkness, having little effect on the adult but disastrous effects on the unborn child. Now the link between Zika virus and microcephaly is not proven as yet, but the circumstantial evidence is worryingly close. The placenta is the most amazing organ, protecting the unborn child from a very great deal of ‘junk’ in the mother’s bloodstream, but it does seem as though the smallest particulate life-form known to man can makes it way through and cause irreparable damage.

It’s worth noting that the arrival of penicillin and the other antibiotics has given us breathing space of about seventy years before the bacteria have found a way of growing resistance to them – suddenly we are back to basics, requiring fantastic sterile techniques to ensure we can secure operating theatres and sick bays from such superbugs. It’s interesting to note that some cancers have found a way of by-passing the chemicals designed to obliterate them in like manner, but due to the amazing work of the Royal Marsden and major research centres in the states, we are learning how to stimulate the body’s own immune system to fight active cancer cells. This pioneer work is perhaps 20 years old now, accelerating over the last 3, and is bit by bit making a huge difference to some of the most invasive cancers we know, such as Melanoma.

To summarise part 1 of this blog; thank goodness we have public health and research and medicine and all that medical jazz, without which many of us would not have made it through to now. However the dangers are real and ever present, and we need to be vigilant and show no complacency. Probably the most amazing thing of all is that not only can humans consciously do something to make the world healthier, but their body immune systems can as well, unconsciously. It’s how we are built.

Todd Rose is the Director of the Mind, Brain and Education program at the Harvard Graduate School of Education. His book, The End of Average has just been published (£20, Allen Lane) and it’s a ripping 196 page-turning read. Daniel Pink, a man who most in the world take really seriously about what motivates us to succeed writes this on the back cover of the book “Todd Rose has taken the latest findings from a new era of science, the science of the individual, to show that our one-dimensional understanding of achievement has seriously underestimated human potential. This book is readable, enlightening, and way above average…”

Don’t get me wrong, I love the book. Everything in it we already try to deploy within Claires Court. The science behind the book is this: Try as hard as you like, there is nothing that fits average. If you measure the dimensions of 15,000 women across 9 measures, and create an ‘normal’ woman, you’ll not find one whose normal. If you measure 140 dimensions of 4000 USAF air force fighter pilots and create an average, the number that match the average is a big fat zero.
You can read the fascinating detail of these late 1940s studies here in the Toronto star.

I have always feared that the concept of equal opportunity is deeply flawed, as this really well-known cartoon shows. If only everyone was a monkey, climbing trees would be a breeze. And for humans, equal opportunity works until gender, nationality, colour, money, privilege kicks in. Despite us liberals’ best efforts, social mobility is worse now than ever before. And the main reason why of course is that we expect everybody to fit a 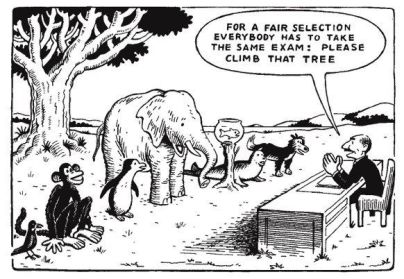 set of rules that have become harder and harder to fit. So instead of seeking equality of opportunity, we need to concentrate on equality of fit; as there is no such thing as average, we’ll never create children to match a one-size fits-all template.

There is a lot written about building resilience in children so that they can experience the slings and arrows of education and social pressures without suffering. Honestly, we have this right now within the greatest nursery school and family settings. Ideal is 5 mornings of social educative play, coupled with 5 afternoons of more personal contact in smaller groups, ideally with a loving parent.  We can substitute the latter by ensuring the afternoon context of nursery is not the same as the morning, but the development of close relationships between child and adult homemaker are essential. It is extraordinary in so many schools just how quickly the child’s socialisation has to become a fit for very tight boundaries of compliance. In the wrong kind of classroom, things can go very slowly indeed. As a wordpress friend, Edna Sackson writes in her blog today, “How much time do you spend shushing twenty-four children while one child speaks?”  There’s no need to run a class where the vast majority of learners are inactive and learning how to do nothing.

Children need expressive arts as part of their diet, they need sport and physical education, they need to paint and draw and create and above all do things that enable them to explore, take risks, do things differently and through those experiences and failures find out the things they can do really well.  And amazingly as all we adults know, since every adult is unique, if they have unique skills and talents to match, then they’ll

always thrive in our society.  But what happens if their school life does not give them this diverse diet?  Does it really matter, so long as they get the grades to make the next step in their education?  Surely a bit of tough love, straight and narrow education never hurt anyone in their formative years?

So here’s the scientific evidence from the USAF study on pilot ‘fit’. As planes rolled off the production line, the cockpit was fitted out to the dimensions of ‘average pilot size’, and the pilots were made to fit the plane. And of course, since no-one actually was the average size, the ‘fit’ was not great. As the demands got tougher, the job got harder in the dawn of jet-powered aviation.  The planes were faster and more complicated to fly, the problems with handling them were so frequent and involved so many different aircraft that the air force had an alarming, life-or-death mystery on its hands. At its worst, on one day 17 pilots were killed. Once their researcher, Lt. Gilbert S. Daniels was put on the case, his findings were clear: Daniels published his findings in a 1952 Air Force Technical Note entitled The “Average Man”? In it, he contended that if the military wanted to improve the performance of its soldiers, including its pilots, it needed to change the design of any environments in which those soldiers were expected to perform. The recommended change was radical: the environments needed to fit the individual rather than the average.

Not only did the USAF listen and change, so did every other engineering industry as well. Imagine what it would  be like to drive your car with the seat and steering wheel settings at the opposite end of your fit. Imagine being too low in the seat and having to drive at high speed through chicanes? You’d stop at once, rather than risk life and limb. 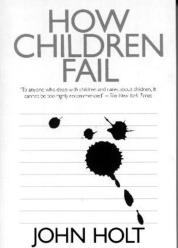 Well one industry in the Western World has chosen not to follow the scientific evidence base, and that is Education. There are institutional outriders such as Claires Court, where the sheer longevity and commitment of teaching staff to do ‘the right things the right way’ means we work to fit the school to the child, and we know how to do that now to the ‘nth degree. But in the mainstream, sadly, the industrialisation of education and the short-termism of ministerial tenure has changed the focus toward narrow assessment and teaching to the test. Another american researcher, this one from the sixties, John Holt discovered for children that which Daniels discovered a decade earlier for pilots. There is no such thing as average, so teaching children so they can achieve an average mark is doomed to failure. Together with his colleague, Bill Hull, Holt moved the emphasis on his teaching to concepts and active learning, and spotted that the ‘better’ students were solely those who were able to forget what they had learned after the test rather than before. Wikipedia covers John Holt’s work really well, as of course did all the teacher training colleges back in the day … until they were shut down in the ’90s in favour of short-and-sharp post-graduate work-place learning where success has been monetised by performing to the test and rising your school up the performance tables.

The health of our children is the most precious of things to our parents, as it was in the fifties.  Whilst in the USAF there were of course plenty of pilots who did survive flying their machines, so many men ‘crashing and burning’ was too high a cost to bear. Likewise now in 2016, whilst the epidemic of adolescent mental health problems continues to escalate across the country, we can still see plenty of signs that students are doing well at school, passing their exams and getting the best jobs. Of course like the pilots, some can cope, but the cost to our society is unacceptable. Current experts in childhood mental health, such as Professors Tanya Byron and Sarah-Jayne Blakemore bang on about this time and again. Children need a massive balance between play, education and nurture, and the ‘fit’ needs to be ‘personal’. This choice to wrap education around the child is a mindset, which dedicated professional teaching staff know. Tailoring to the child works best. And even government knows this: “Every child matters!”

And guess what, not only will children grow in every sense of the word consciously, engaged with their school and education and mastering the most complex of skills, with lots of effort and quite a lot of failing too along the way. And that broad diet of work shaped around their needs means that their unconscious health is looked after as well. They develop the resilience to their mental health as much as they do with their immune system. Amazingly, it’s how we are built.

Alternatively, you can believe in what our Ministers for Education feel about educational ‘fit’.

The “purpose of education” is to enable people to read academic texts and appreciate the theatre.

1 Response to A line of Best Fit – Children, Education and Health