The following article is written to sit alongside a variety of secondary and sixth form assemblies I am giving currently about the rights of man and the needs for a civil society, and that they are not perhaps the same.

“Wherever law ends, tyranny begins.” These words, written by 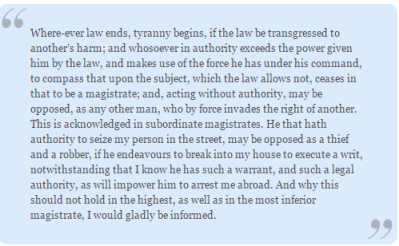 John Locke, philosopher, in 1689, begin a proposition around which all of us are reminded that we are under “the sovereignty of the law”.

It is by the customs and practices of the law that we all live and thrive, and just societies need the rule of law for justice and order to prevail.  This usually arises by the state ensuring that the judiciary are independent of its work, such that government can also be held accountable for its actions.

A just society also needs a dependable civil service, in order to provide and maintain a degree of services for society that provide order and safety. Taxes need to be paid reliably and honestly, traders held to account should they debase the flour or market dishonourably, and the rights of the individual balanced against the needs of the wider society. How houses and roads get built, new industries and technologies deployed are all part of a process that society needs to regulate. Within this civil service come things such as health services, education, community care and such like.

Of course we also require secure police  and armed forces, to ensure that internal and external threats to our ordered lives are managed and defended as aps appropriate. In many ways this is as important as the other two; uniformed forces may arise before the rule of law and the civil service, but they should not be diminished in the hope that we live in a perfect world, because we don’t.  As internal and external violence to our society are as evident now as they have ever been, we need authorised muscle to be available for our protection, and accountable of course should it exceed its authority.

2016 has continued the trend that ‘British Society’ is not as good as we would wish it to be.  The latest findings of the new inquest into the Hillsborough disaster published this week show that one of our police forces and the ambulance services of the day failed in their duty of care to protect those in attendance at the football match.  The report revealed “multiple failures” by other emergency services and public bodies that contributed to the death toll.  Many news organisations most notably the Sun and the Times acted disgracefully at the time, blaming drunken hooliganism as the cause and singling out Liverpool supporters specifically, and for a time we, the public, believed the headlines. I could say much more, or indeed point out other scandals still running, such as neglect of child abuse in many of our cities by the authorities, or the way national government has failed this nation of tax payers through permitting the offshoring of wealth by the richest and most powerful of individuals and corporations.  The latest High Street demise of BHS leaves us all with the very uncomfortable feeling that one man’s ocean-going liner is another 11,000 employees pension fund.

Back in 1987, Margaret Thatcher famously declared that there was no such thing as society, and that the rights of the individual were paramount. From that day onwards, our society has moved this way, to promote the rights of the individual, to the extent that we have seen really very rapid acceptance of new rights and accommodations that previously were unheard of.  Gay marriage and same-sex parenting are 2 obvious examples, and honestly I see these developments as being signs of a healthy society, not evidence of progress towards barbarism. All my adult life I have actively promoted the liberal rights agenda, been in membership of a political party that supported same (the Liberal Democrats) and funded my membership of Amnesty International and Greenpeace as a way of assisting the support of a more just world order and society.  Just now, I fear I have not influenced one agenda specifically strongly enough, that of the need above all to have a civil society.

In education, health, policing and the defence forces we are seeing the wholesale dismantling of the civic organisations that manage this provision for our local areas and nation as a whole, and the neutering of local and national parliament to have a say in such on-going provision. Much is being made of the national financial deficit we find ourselves in past the Banking crisis of 2007, but the solutions now being imposed are not fundamentally about cost savings.  The proposed academisation of all 28000 state schools is clearly much more expensive than leaving the schools where they are, for example.  The replacement of local and national control over police and education through the election of police and crime commissioners and the appointment of regional school commissioners encourages us to believe that individuals are better at managing our needs than organised groups of local citizenry, be they councillors or school governors. The transfer of our armed defence from paid professionals to a larger group of territorial volunteers is about cost saving of course, in the same way as may happen with the police or those in community care.  The removal of the rights of those poorest in our society to receive legal aid, or disability allowances from the disabled are in similar vein. What’s so confusing is that all is happening simultaneously, under the pretext that the elected government have the authority of a general election win. In reality, the victory was by the slimmest of margins, and those now in power are not choosing to recognise their responsibilities to represent all in the country not just the minority that voted for them.

At a time when so much of our civil and ordered society is under threat from those whose vision is blighted by their own rhetoric and prejudices, I for one feel it important to make public and constant my serious objections to the appalling speed at which change without evidence is being wrought on our communities.  There are indeed good and noble members of parliament in government today, and their voices of dissent are audible.  The Select committees and House of Lords are doing their best to hold the executive to account, bringing back for inspection and scrutiny matters that need just that, but the Parliamentary year is not actually long enough to cover the 52 weeks of ‘collar’ feeling’ we need.

It is interesting to note just how many state and independent fellow professionals are highlighting that the current tyranny of ‘Do as you’re told’ by our executive government is causing great damage.  3 decades ago when the police were not the transparent organisations they are becoming now, both the newspapers and the public at large took hookline and sinker the story those in power wanted us to believe. Likewise now, a new tyranny hell-bent on change at all costs is trying to remove the scrutiny of the ‘law’ on its works. Parents to be removed from school governance, services to be distanced from the local authorities, employees to be redunded from the civil service to disempower it – I could go on and on.

Another of John Locke’s quotes is “We are like chameleons, we take our hue and the color of our moral character, from those who are around us.” I know we need a powerful citizenship working within a civic society that does it duties for those therein.  It was the case 327 years ago and is still this day.  Locke was writing at the outset of the Age of Enlightenment during the 18th Century – Wikipedia reminds us that the Enlightenment included a range of ideas centered on reason as the primary source of authority and legitimacy, and came to advance ideals such as liberty, progress, tolerance, fraternity, constitutional government and ending the perceived abuses of the church and state. Here’s hoping a sense of reason resurges across the country over forthcoming weeks and months; choosing the dismantle the UK’s agreed structures with its partners in Europe would be another disaster in the making, and at least in that regards we have some political leadership on show! 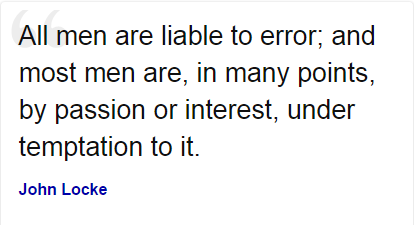