It’s time to take a broader view on selection…why choosing only the most able for medical school is serving General Practice so badly.

Since starting headship, I have 37 generations of pupils leave secondary age at 16, fired up for Sixth Form or the world of college and work. My experience will be little different than that shown by longer term research data – the life chances and success of my former pupils are much more likely to be determined by their character traits and family background, than they will be by A levels and undergraduate degree. Of greater concern is that the majority of our children have multiple talents and interests, so the fact that the most able may sign up for medical school does not mean they are planning to commit themselves to a Doctor’s life for the next 4 decades. They, like so many of their peers also fancy themselves as entrepreneurs, authors, sports stars, musicians, or perhaps planning a gap year or decade off before they commit to the next steps in their lives, such as children, permanent partnerships, retirement and so on, perhaps emigration even?

At the time of writing, over 400+ English curriculum schools are opening per annum beyond the United Kingdom, so it’s no surprise to learn that loads of teachers here in the UK are choosing to use their internationally recognised qualification to fund travel and new experiences elsewhere in the world. Back in 1978, having done 2 years at Claires Court and a new convert to skiing, I applied to work in Switzerland for a year or so. Before anything could materialise, my pathway promotion happened here, so I deferred my interest…and continue so to do.

Any, back to applications for medical school. This year, of the handful of applicants we have for medical school, all are at the very highest end of the ability range and the same expectations are true for them as they are for all the others shortly to depart for higher education; beyond their first degree lies the ‘University of Life’ and it’s about time that we found a way of opening up the first 3 years of medical school so that so many more students can pursue the possibility of GP-dom, rather than restrict this to only those that are being ‘spat’ out of hospitals after 10 years.

The one thing that many of the most able share in common is a short attention span for the things that come easy, and many don’t actually have the social listening manner that goes down so well with both GPs and career teachers. Patience is a virtue, often learned over a period of time by those who know they are rather more the ‘tortoise’ than the ‘hare’ in the ‘rat’ race. Indeed as a centre for the training of teachers, it’s interesting to note that some of our most committed teachers have been late entries to teaching or who have enjoyed a career-break away from education doing something new and life-affirming. 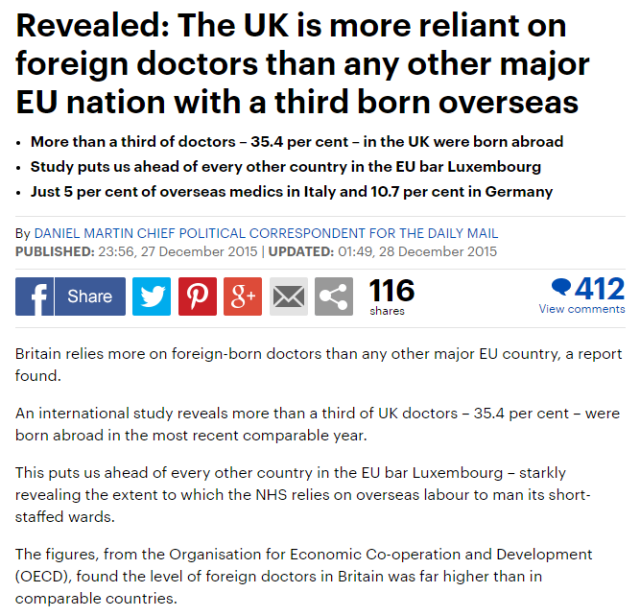 I kid you not when I suggest that our schools are awash with really wonderful 18 year olds who would give their eye-teeth to have a go at a career in medicine, but because their GCSEs are not 6A* or better, have no chance of even being considered for Medical school. Many of these will go on to satisfying careers as leading professionals in maths, engineering, the sciences, natural or applied, be that for brewing, buildings, engineering, food, psychology, rockets, sports or telephony; in short great students capable of Masters and PhDs, but way too stupid (it is suggested) to be in General Practice advising patients, families and the community in matters of private and public health (if UCAS requirements for Medicine are to be met).

I like the comparisons between education and medicine for this reason. You can’t really get to specialise at Doctorate level and beyond in education without doing 2 years in the classroom. It’s rather odd that in medicine, you can’t enter General Practice until you have completed 5/6 years at Uni, 2 years on clinical rotations and then 3 years of vocational training. There is every chance that after 10 years of such a slog, all who really want to work in the community and exercise their communication and collaboration skills have been excised out of the system. In my view, it’s time for the General Medical Council to take a fresh look at the pathways into medicine. It is quite ludicrous that Italy can provide all but 3% or so of their medical specialists from their own schools and colleges, but we feel it is OK to go plunder so many developing countries of their best doctors, whilst keeping the selection for the profession so ridiculously elite here in the UK.